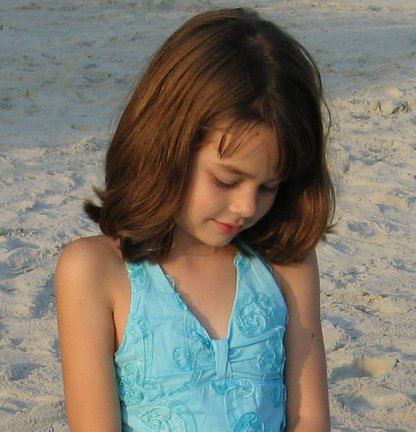 On January 23, 2007 our 6 year old daughter, Emily, was diagnosed with a malignant tumor called Rhabdomyosarcoma. It was in her left kidney and attached to her pancreas, diaphragm and spleen. The surgeons were able to remove all visible pieces but the tumor did break open during that process and there was some spillage in her body cavity.

After she was well enough, Emily started 42 weeks of chemo and thrown in the middle were 4 weeks of radiation. On November 12, 2007 we thought that Emily had her last chemo treatment. Then, on May 3 of 2008, we had to rush Emily back to the hospital because of breathing problems. We were told that the tumor was back and that it had collapsed her left lung.

After several rounds of chemo and radiation the tumor continued to grow so our only option was surgery. Unfortunately, the surgery was more than her little body could handle, especially since the tumor was the size of a football. Emily never woke up from her surgery and died one week later on June 24, 2008.

When Emily was first diagnosed with cancer, she spent several weeks at East Tennessee Children’s Hospital recovering from her surgery and then having her first round of chemo.  It was during this time that she was given a special gift from Josh and Friends.  She received a stuffed dog named Josh that had his own dog house and a book called, I’ll Be OK.  Emily was so excited!  Not only did she love dogs but he came with his own dog house which was so cool to her!

Fast forward a few months later and Emily is chosen to be the Tennessee Champion Child for Children’s Miracle Network!  What an honor it was for her to represent Tennessee in this way!  Because she was chosen as a Champion Child, our family got to go to Walt Disney World and Washington D.C. for the annual CMN Telethon!  Emily had such a good time meeting all of the Champion children from each state and she even got to meet some celebrities!  One of the biggest highlights of the trip for her, though, was meeting the real life Josh and Dr. Lange!  We couldn’t believe that they were there!  It was such a neat experience that we will never forget!

We are so thankful for the staff at Josh and Friends and what they do for the sick children in our community.  Hospital stays are frightening and confusing for children so receiving a gift always makes the stay a little more bearable.

Free Shipping for a Limited Time on 1 Josh Gift Set!

Order Now to Take Advantage of This Special Offer!