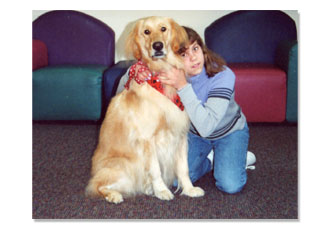 "As I continued reading, I could see that Alicia was holding Josh tighter and tighter."

Josh came into young Alicia’s life just as she faced a second serious surgery. She was reluctant and afraid because her first surgery had been so painful. Alicia’s dad, a research veterinarian for Bayer Animal Health, brought Josh home. When her dad read Josh’s story to her, the connection was immediate. She saw Josh go through blood work, X-rays, I.V.'s, anesthesia and surgery. When she felt Josh’s scar from his incision, she was a believer.

"As I continued reading, I could see that Alicia was holding Josh tighter and tighter. From that point on, Alicia no longer resisted surgery. She was still scared but Josh convinced her that it’s normal to be scared. She knew that he and her family truly love her," reports Alicia’s dad.

On the day of Alicia’s surgery, nurses gave Josh his very own hospital ID bracelet. She clutched Josh on her way to surgery and found him waiting beside her when she woke up. (Alicia’s surgery went great. She’s now recovering.)